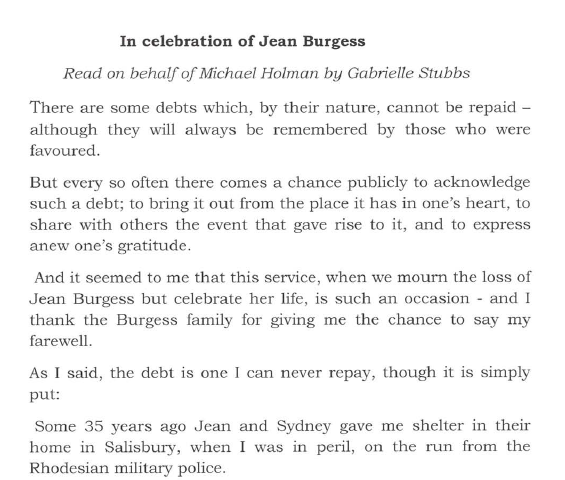 Read on behalf of Michael Holman by Gabrielle Stubbs

There are some debts which, by their nature, cannot be repaid - although they will always be remembered by those who were favoured.

But every so often there comes a chance publicly to acknowledge such a debt; to bring it out from the place it has in one’s heart, to share with others the event that gave rise to it, and to express anew one’s gratitude.

And it seemed to me that this service, when we mourn the loss of Jean Burgess but celebrate her life, is such an occasion - and I thank the Burgess family for giving me the chance to say my farewell.

As I said, the debt is one I can never repay, though it is simply put:

Some 35 years ago Jean and Sydney gave me shelter in their home in Salisbury, when I was in peril, on the run from the Rhodesian military police.

It was an act of quiet courage and brave defiance, for these were troubled and dangerous times. A war was gathering pace, and racial divisions had deepened in the country now called Zimbabwe

Yet for three weeks they were my refuge, at no small risk to themselves - until that July day when I left their protection, and set off on a trail that led to London and freedom.

This is the debt to Jean and Sid, shared by my mother Sue and by my partner Gabrielle. We can never repay it. But today we do more than acknowledge it, and celebrate it...

As son Saccaka put it, we rejoice!

Many years later, Jean, who by then was living with Saccaka and Rosemary, said she had something to give me.

She rustled through a pile of papers that were spread across her table, testimony to her talents as painter and poet. Yellowing family photographs, handwritten poems, some ready for a typewriter, some still in draft, letters and watercolours… scattered like a mosaic of her life...

All safely secured under her well-used, much loved Scrabble set.

Many of the poems were illustrated, with fine pen and ink drawings and sketches of scenes, or people, animals and insects, depicting the southern Africa that was part of her.

I noticed that one creature in particular featured more than once. It was as if Jean felt an affinity for it, battling with a ball twice its size, rolling it with huge determination to an unknown destination.

Finally she found what she was looking for. She handed me a postcard, somewhat dog eared. It was from London, dated July 13 1976.

“Dear Mr and Mrs Burgess”, I had written, “My journey went without a hitch...it was an enormous relief to arrive".

That year Jean sent me a card with a drawing of a valiant beetle, a dung beetle, stoically grappling with its burden - but with a difference.

The dung ball it was rolling was topped by that ancient symbol of life, standing like a candle on a birthday cake - a sprig of holly.

“Happy Christmas” she had written below.

Letter to Chris from Lusaka

Spirited general who fought for the poor

By Michael Holman If wars have their unknown warriors, whose sacrifice enlightens and inspires s... Read more