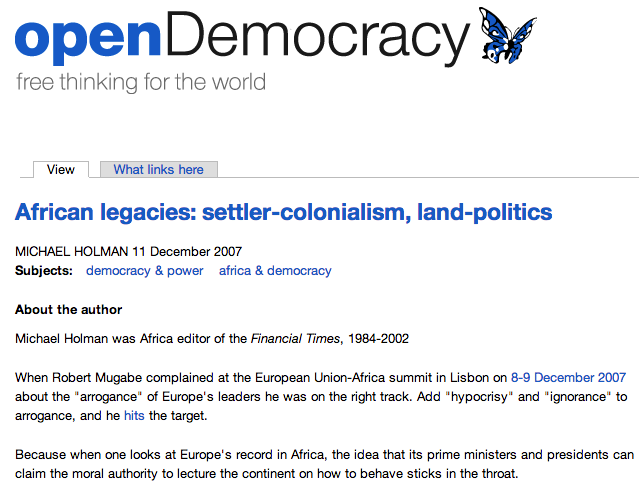 When Robert Mugabe complained at the European Union-Africa summit in Lisbon on 8-9 December 2007 about the "arrogance" of Europe's leaders he was on the right track. Add "hypocrisy" and "ignorance" to arrogance, and he hits the target.

Because when one looks at Europe's record in Africa, the idea that its prime ministers and presidents can claim the moral authority to lecture the continent on how to behave sticks in the throat.

Put aside the record of the host, Portugal; leave, for the time being, the example of Belgium; and deal with France and Spain on anther occasion. Instead, let's concentrate on the role of the United Kingdom.

Here are just a few episodes:

* the opposition in the 1950s to the marriage of Botswana's president, Seretse Khama, to a white woman, Ruth Williams

* its staunch opposition to the decolonisation process

* its reluctant opposition to apartheid

* its creation of the Central African Federation in 1953, and its dissolution in 1963 (when Britain allowed the handover of the federal army and air force to a white Rhodesia already plotting a unilateral declaration of independence [UDI])

* its refusal to back Zambia's post-independence efforts to end its reliance on transport routes through white-ruled South Africa.

In all these cases - and they are only a selection - London has backed the wrong side.

Small wonder that when today's British politicians, Conservative and Labour alike, assume the moral high ground on Zimbabwe, Africa's response is cautious, and Mugabe is contemptuous.

Indeed, of all the failures of colonialism in southern Africa, Britain's record in Zimbabwe offers the most fuel for this contempt.

The physical presence of Robert Mugabe dominated the coverage of the Lisbon proceedings. Zimbabwe's president blamed everyone but himself for his country's economic collapse, and treated the boycott of Lisbon by Gordon Brown as a personal triumph, unable to realise it is a pyrrhic victory.

But the ghost of his great rival, the late Ian Smith - the architect of UDI, who died on 20 November 2007 - surely haunted the summit. One can hear white Rhodesia's leader now, castigating the man he held responsible for the devastated country, and saying to anyone who will listen: "I told you so".

For these men, leaders of Rhodesia and Zimbabwe, land has been fundamental in their exercise of power. And the way the land question was managed after independence - in Zimbabwe, and, by instructive comparison, in Kenya - highlights the role of both Britain and of post-colonial political leaderships in shaping the very different outcomes in these two African countries.

When Ian Smith declared independence in November 1965, he was driven by his commitment to the country's 5,000 white farmers, the beneficiaries of a system of segregation which allocated half the country to the 5 million black majority, and the remaining half - including the most fertile land, and all the towns - to the 275,000 "European" minority.

It was this legacy that Robert Mugabe set out to destroy, although he soon lost the moral high ground. He turned what should have been an orderly resettlement exercise, intended to benefit landless peasants, into brutal, mob-led evictions. And the farms that whites were forced to vacate were distributed not to the needy, but to Mugabe's cronies as a form of patronage that has helped keep him in office.

But as the case of Kenya shows, it could have all been otherwise: had Britain acknowledged its full colonial responsibility for financing the resettlement exercise - and had Zimbabwe enjoyed better leadership.

The history of the two countries has many shared features: both were British colonies, and the white minority in each - 60,000 in Kenya, 275,000 in Rhodesia (later Zimbabwe) - lived on land expropriated by settlers at the turn of the century. Both minorities tried to resist the rise in African nationalism in the 1950s, a movement which marked the end of the colonial era.

The whites could not prevent the loss of their power, but each country still had to endure a war to bring home the intensity of black majority opposition to minority rule.

In the case of Zimbabwe, the guerrilla conflict that led to independence in 1980 is still relatively well remembered; but it is all too easy for outsiders to forget that white-settler occupation of land in Kenya had created an explosive situation, which was to erupt into war.

In Kenya, fewer than 1,000 white farmers - almost all of British stock - held more than 8 million acres of the nation's best land, and with London's help, tried to resist a guerrilla campaign to dislodge them.

Backed by the Kikuyu, Kenya's largest ethnic group, the rebellion known as Mau Mau first surfaced in the late 1940s, and steadily gathered in strength.

In 1952 a state of emergency (which was to last until 1960) was declared. On the night of 20 October that year the first British battalion arrived. By May 1953 there were two British brigades - more than 6,000 strong - supported by six battalions of the King's African Rifles, and two Royal Air Force bomber squadrons.

More than 10,000 so-called "terrorists" and their sympathisers were to die -some historians put the figure at ten times that number, in accounts that have provoked acclaim and controversy - while thirty-seven settlers lost their lives.

By the start of the 1960s, representatives of Kenya's 6 million-strong African majority, impatient for change, controlled parliament. Full independence from Britain was only months away. Land redistribution was high on the agenda and whites were nervous.

"Is European farming going to carry on?" asked an anxious writer at the time. "Can the country keep going when it turns sound economic farms into subsistence units? Farming and independence are at loggerheads", he concluded gloomily.

Fortunately for Kenya, and not least the settlers, the man convicted of masterminding the Mau Mau rebellion and held in detention for seven years until his release in 1961, bore no grudge: it was Jomo Kenyatta who helped pave the way to peaceful transition to majority rule when he addressed farmers in the "white highlands".

They still had a future in independent Kenya, he assured them - but they could, if they wanted, sell their farms on a "willing seller, willing buyer" basis.

In making this pledge, however, he had sufficient financial support from Britain and other donors - who were able to fund the purchase of farms and provide land for black Kenyans - to put promise into practice.

The British government of the day was prepared to be the main contributor to a £20m Kenyan land-resettlement fund - worth well over £250m at today's prices - to help pay for the redistribution of former white farmland.

"At the approach of independence", wrote a contemporary commentator, "rising pressure from the landless Kikuyu tribes for farms (put the spotlight on) the run-down estates in the highlands owned by Europeans, many of whom were anxious to emigrate provided they could recover the capital they had invested in their land."

Hence the launch in mid-1962 of what became known as the "million-acre scheme" financed largely by Britain, with West Germany and the World Bank providing the balance.

A little over 1 million acres of land owned by 780 white farmers was bought. By the end of 1971, when the scheme was wound up, about 35,000 families had been settled on 1.2 million acres.

After 1965, the government adopted a different approach. A special commissioner registered and settled squatters on ten-acre plots carved out of abandoned or mismanaged white farms which had been taken over.

By the mid-1980s, these squatter schemes, together with the million-acre scheme, had settled more than 71,000 families on nearly 2 million acres - about 17% of all the land originally held by white farmers.

"Without such a plan, undoubtedly there would have been a breakdown in race relations, and violence and theft on a very large scale and a collapse in the general economy", writes the commentator.

Resettlement not only defused political tension. It helped change the structure of Kenyan agriculture, with export-crops such as tea and coffee, previously a white preserve, for the first time being grown in quantity by smallholders.

The financial help offered to Robert Mugabe was miserly in comparison: at independence in 1980, Britain's initial contribution to Zimbabwe's land-resettlement programme was £30 million (£75m at today's prices). And while a further £14m was provided, and an additional £36m had been promised, the total UK contribution is well under half the support which was given to Kenya.

In short, Kenya received twice the amount of money that was offered Zimbabwe - although Zimbabwe had five times as many white farmers to buy out.

Meanwhile land remains at the core of Kenya's politics: the size ofshambas (plots) is shrinking by the year under pressure from population increase, and the demand is rising for the subdivision of the many large farms that remain in the hands of politicians and businessmen. Above all, the number of landless Kenyans is more than 3 million, and the total is climbing.

Nevertheless, Kenyans can look back and give thanks for a leader who could afford to be pragmatic - and they might spare a thought for Zimbabweans, who have not been blessed, either in the quality of their politicians or in the behaviour of their coloniser.

African Deadlines: "Twenty Two Years in the Long Grass of Central Africa without a break"