Africa is rising - and Britain's bwanas are out of step 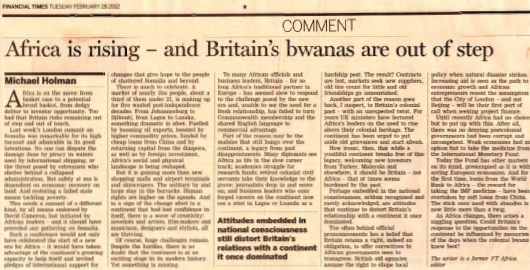 Africa is on the move: from basket case to a potential bread basket, from dodgy debtor to investor opportunity. Too bad that Britain risks remaining out of step and out of touch.

Last week's London summit on Somalia was remakable for its high turnout and admirable in its food intentions. No one can dispute the damage done by piracy in waters used by international shipping, or the thread posed by extremists who shelter behind a collapsed adminstration.

Africa is on the move: from basket case to a potential bread basket, from dodgy debtor to investor opportunity. Too bad that Britain risks remaining out of step and out of touch.

Last week’s London summit on Somalia was remarkable for its high turnout and admirable in its good intentions. No one can dispute the damage done by piracy in waters used by international shipping, or the threat posed by extremists who shelter behind a collapsed administration. But safety at sea is dependent on economic recovery on land. And restoring a failed state means tackling poverty.

This needs a summit of a different kind, by all means endorsed by David Cameron, but initiated by African leaders – and it should have preceded any gathering on Somalia.

Such a conference would not only have celebrated the start of a new era for Africa – it would have taken advantage of the continent’s growing capacity to help itself and invited pledges of international support for changes that give hope to the people of shattered Somalia and beyond.

There is much to celebrate. A market of nearly 1bn people, about a third of them under 21, is making up for five wasted post-independence decades. From Johannesburg to Djibouti, from Lagos to Lusaka, something dramatic is afoot. Fuelled by booming oil exports, boosted by higher commodity prices, funded by cheap loans from China and by returning capital from the diaspora, as well as by foreign investment, Africa’s social and physical landscape is being reshaped.

But it is gaining more than new shopping malls and airport terminals and skyscrapers. The military by and large stay in the barracks. Human rights are higher on the agenda. And in a sign of the change afoot in a continent that had lost confidence in itself, there is a wave of creativity: novelists and artists, film-makers and musicians, designers and stylists, all are thriving.

Of course, huge challenges remain. Despite the hurdles, there is no doubt that the continent is at an exciting stage in its modern history. Yet something is missing.

To many African officials and business leaders, Britain – for so long Africa’s traditional partner in Europe – has seemed slow to respond to the challenge posed by the new era and, unable to see the need for a fresh relationship, has failed to turn Commonwealth membership and the shared English language to commercial advantage.

Part of the reason may be the malaise that still hangs over the continent, a legacy from past disappointments. Many diplomats see Africa as life in the slow career track; academics struggle for research funds; retired colonial civil servants take their knowledge to the grave; journalists drop in and move on; and business leaders who once forged careers on the continent now see a stint in Lagos or Luanda as a hardship post. The result? Contracts are lost, markets seek new suppliers, old ties count for little and old friendships go unnourished.

Another part of the reason goes back, I suspect, to Britain’s colonial past – with an unexpected twist. For years UK ministers have lectured Africa’s leaders on the need to rise above their colonial heritage. The continent has been urged to put aside old grievances and start afresh.

How ironic, then, that while a youthful continent breaks free of this legacy, welcoming new investors from Turkey, Malaysia and elsewhere, it should be Britain – not Africa – that at times seems burdened by the past.

Perhaps embedded in the national consciousness, seldom recognised and rarely acknowledged, are attitudes that continue to distort Britain’s relationship with a continent it once dominated.

Too often behind official pronouncements lies a belief that Britain retains a right, indeed an obligation, to offer correctives to African governments seen to transgress. British aid agencies assume the right to shape local policy when natural disaster strikes. Increasing aid is seen as the path to economic growth and African entrepreneurs resent the assumption that the City of London – and not Beijing – will be their first port of call when seeking project finance.

Until recently Africa had no choice but to put up with this. After all, there was no denying postcolonial governments had been corrupt and incompetent. Weak economies had no option but to take the medicine from the International Monetary Fund.

Today the Fund has other matters on its mind, preoccupied as it is with saving European economies. And for the first time, loans from the World Bank to Africa – the reward for taking the IMF medicine – have been overtaken by soft loans from China. The stick once used with abandon is now little more than a twig.

As Africa changes, there arises a niggling question. Could Britain’s response to the opportunities on the continent be influenced by memories of the days when the colonial bwana knew best?

The writer is a former FT Africa editor.

Sir, In “Africa is rising – and Britain’s bwanas are out of step” (February 28), Michael Holman is spot-on regarding Britain’s relationship with the continent. It is a pity he ends with a “niggling question” when answers are urgently needed – for Africa, for Britain and the world.

Being a post-colonial “bwana” who doesn’t want to take his “knowledge to the grave” I would like to suggest we begin the search for answers by remembering the old colonial saying: that in Africa things are not always as they seem. For all its promise Africa remains the world’s most challenging and most misunderstood continent.

Africa is rising and, yes, this time is different. But unfortunately so much is still the same and there is a disturbing sense of déjà vu on the continent today. Africa’s new partners, led by China, though bringing much-needed investment, are turning back the clock in more ways than one. China’s hands-off policy towards governance is little different from our “turning a blind eye”, which resulted in some of the most murderous regimes and brutal kleptocracies of modern times. The planning, technology and economics of many emerging markets investments in Africa – the most potent symbols of which are Africa’s new generation of multi-billion dollar dams, farms and sugar enterprises – carry the same hidden costs as our failed attempts, only today the projects are on mega scales with equally mega costs. Do we see mega white elephants on the horizon?

Africa’s quiet and patient green revolution, which has been gathering momentum since 1992, and which is the only hope for Africa’s future, is in danger of being knocked off course by the “brown” development strategies of those who have not learned from our mistakes.

This is where Britain and other European former colonisers can step in to help rebalance this last frontier for investment. The European Union, with Britain perhaps leading the charge, has the 21st century technologies Africa needs for a sustainable rise that will be good for us all. Europeans have developed the organisational tools. We have developed the systems that could help make the dream of economic independence in Africa come true. We have beaten our chests and poured enough ash on our heads over the past 20 years to understand how only by expanding Africa’s green economy will this new and vital growth engine continue to run.

Face up to reality and start talking to Robert Mugabe

It is time for the west to take stock, set aside old scores and take a fresh look at Zimbabwe. Read more