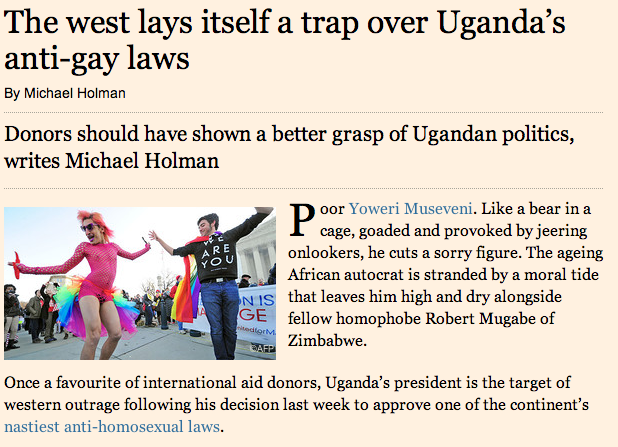 Donors should have shown a better grasp of Ugandan politics, writes Michael Holman

Poor Yoweri Museveni. Like a bear in a cage, goaded and provoked by jeering onlookers, he cuts a sorry figure. The ageing African autocrat is stranded by a moral tide that leaves him high and dry alongside fellow homophobe Robert Mugabe of Zimbabwe.

Once a favourite of international aid donors, Uganda’s president is the target of western outrage following his decision last week to approve one of the continent’s nastiest anti-homosexual laws...

... Not for the first time donors have been outsmarted by a wily politician whose grasp of African geopolitics is far more acute than theirs. Having failed as the world’s policeman, the west needs to think before becoming a self-appointed monitor of Africa’s morality.

A rescue package for the stricken of Zimbabwe

If bravery shaped reality, Zimbabwe would be starting a new era. In the face of thuggery and in d... Read more

For 40 years, western-led donors have been putting money into Africa. Yet its citizens have got p... Read more

Austerity, Bono and a culure of cuts

By Michael holman   Thank goodness, the IMF and the bank don't bother us in Africa. Instea... Read more